Kindergarten to Year 12 students and teachers

Schools Spectacular is an iconic cultural event incorporating students from diverse backgrounds and communities from the length and breadth of the state. 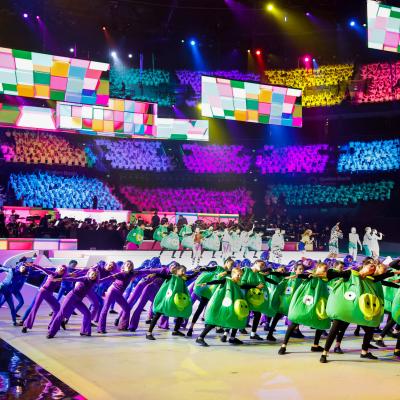 Watch the Schools Spectacular again on 7plus

2022 Schools Spectacular Creating The Magic on 7plus

A special encore screening will be shown on the Seven Network on Saturday 23 December 2022, at approximately 10:30 pm, after Carols in the Domain. This annual event is a celebration of youth, education, culture, diversity, and the talent of young Australians. It features over 5,000 students from public schools across New South Wales and has the theme 'Creating the Magic' for this year.

About the Schools Spectacular

The Schools Spectacular is a world-class arena production and one of the most significant annual events of its calibre anywhere in Australia and arguably the world. From its ability to produce national and international stars to its role in promoting inclusiveness and reconciliation, the Schools Spectacular has no peer.

The Schools Spectacular is a remarkable New South Wales success story proudly presented by the NSW Department of Education.

Visit the Schools Spectacular website for information on how to get involved.

Enjoy the Be inspired showcase exhibiting the extraordinary talent from NSW public schools.

The Spectacular Schools - Inspired digital showcase exhibits the incredible talents of our NSW public school students from Kindergarten to Year 12 in a connected, inclusive, digital forum. This showcase is all about cutting-edge artistry, boundless creativity, and excellence in the arts.

Music
Music teachers
Teachers who are interested in being a part of the team that brings the musical aspect of the Schools Spectacular to life are encouraged to apply for this opportunity.
Back to the top

Creating the Magic – behind the scenes

Come behind the scenes and experience what it takes to create the magic on stage.

Creative Resource Dance Drama Literature and language arts Music Visual arts
Celebrate the creativity and resilience of staff and students by joining us in this digital showcase of NSW public school achievements.

More digital resources Back to the top

Students from NSW public schools in Years 5 to Years 12 are invited to apply for the NSW Public Schools Recorder Camp.  This annual 4 day residential recorder workshop and camp culminates in performances at the Festival of Instrumental Music.

Local arts program Public schools Dance Music
Years 7 to 11
This ensemble is a touring group of performers in a musical variety show for schools and community groups. The group includes a stage band, dancers and vocalists.
Back to the top