The Premier's Debating Challenge for Years 11 and 12

The competition is open to senior students in NSW government schools. Teams compete in a series of knockout debates to decide the winner of the prestigious Hume Barbour Trophy.

Back to The Premier's Debating Challenge
Image 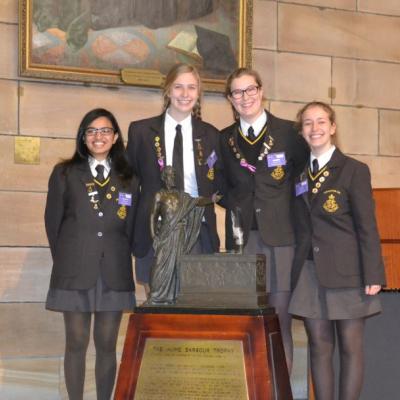 Congratulations to Sydney Girls High School who were named the 2022 champions after a cracking state final held on Friday 5 August in the Great Hall of the University of Sydney. They defeated an excellent team from Rose Bay Secondary College by successfully negating the topic 'That we should stop having a prime minister.' Great stuff from both sides and from all the 150 teams who took part in this year's competition. Finally, a massive thanks to all the teachers who took on the extra work of running a debating team at such a busy time for schools – this competition would not have been possible without their willingness to go the extra mile to give their students this opportunity.

This competition began in 1930 with the generous donation of a trophy by Miss Hume-Barbour, a descendant of Hume the explorer, after whom the Hume Highway is named. The trophy, depicting the Ancient Greek orator Demosthenes, was the work of the noted sculptor Rayner Hoff who was also responsible for the Archibald Fountain in Hyde Park.

Teams take part in a series of one hour preparation debates with both sides having a choice of 3 topics. This age division of the challenge is supported by the Law School of the University of Sydney.

You can use your life at any time during the first 4 rounds. If you lose a second debate you’ll officially be eliminated, but if you’re still keen to keep debating we’ll match you up with someone else for a friendly debate as many times as you like.

If 2 teams can’t quickly find a suitable date and time, we can just find them different opponents. Most importantly, if things get too busy or the team starts to feel overloaded, you can drop out without having to forfeit and cost someone else a chance to debate.

Video
This is the 2021 final of the Years 11 and 12 age division between Smiths Hill High School and Sydney Girls High School.

Duration: 1:16:01
This is the 2021 final of the Years 11 and 12 age division between Smiths Hill High School and Sydney Girls High School.

Useful frameworks for writing, developing and presenting an argument.

Past debaters share tips and present a rebuttal to their former selves.

More digital resources Back to the top

No items available for the selected filters. Please reset and try other options.
Back to the top