Open to all NSW public schools with the aim of developing public speaking and reasoning skills of students.

Back to Debating
Image 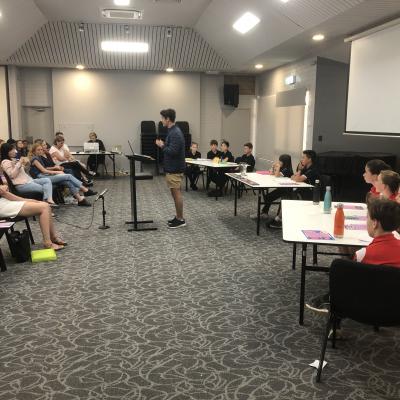 The Premier's Debating Challenge is open to all NSW government schools with the aim of developing the reasoning and public speaking skills of students from Years 5 to 12. Entries in the 2022 challenge have closed, but if you need to explore the possibility of a late entry please call the Speaking Competitions Officer on 02 8512 1172.

What age groups can compete in the Premier's Debating Challenge?

How do the debates work?

Every debate in the challenge is a one hour preparation debate. Teams do not know the topic or which side of the debate they are on until one hour before the debate starts. Once the preparation time is up, three speakers from each team take turns to speak, with a fourth teammate helping out during both preparation and the debate. Debates can be held in-person or over Zoom to suit the schools involved.

How long do the students speak for?

The speaking times differ in each age division of the challenge as outlined below.

How many teams can a school enter?

Who can be in the debating team?

In any given debate a team will field four members. Those members can change from debate to debate, so a team can in fact be made up of a large squad of students. The students can be from any year equal to or below the age division in which the team is entered (for example, a Year 10 student can debate in a Years 11 and 12 team). When a school enters two teams in the same age division, a student cannot appear for both of those teams, so Team (A) needs to have a different and separate squad from Team (B).

How do schools enter the challenge?

Schools can enter the challenge by completing the online entry forms which can be found using the red button at the top of this page. For the Years 11 and 12 age division, that deadline is Monday 14 February 2022. The deadline for the other divisions is Tuesday 1 March 2022. We’ll email you as soon as we’ve processed your school’s entries.

How much does the challenge cost?

The entry fee for the Premier's Debating Challenge is $95.00 per team. Schools will automatically be debited for this amount once they submit their entry form. Please advise your school’s finance department that this will occur, and note that fees are due on entry and cannot be refunded even where teams might subsequently withdraw.

What are the prizes?

The Premier's Debating Challenge for Years 11 and 12

Literature and language arts
The competition is open to senior students in NSW government schools. Teams compete in a series of knockout debates to decide the winner of the prestigious Hume Barbour Trophy.

The Premier's Debating Challenge for Years 9 and 10

Literature and language arts
A state-wide competition with zone winners progressing to regional and state-wide knockouts to determine the state champion.

The Premier's Debating Challenge for Years 7 and 8

Literature and language arts
Open to NSW government school students, the competition culminates in a 3-day championships camp that includes workshops with some of the state's most experienced adjudicators.

The Premier's Debating Challenge for Years 5 and 6

Literature and language arts
Open to NSW public school students, this age division culminates in a 3-day championship camp that includes workshops with some of the state's most experienced adjudicators.
Back to the top

Author interviews from the 2019 Sydney Writer's Festival from the Parramatta Riverside Theatre.

Creative Resource Literature and language arts
Years 3 to 6
A fun and educational way for primary school students to engage in spelling. The program includes activities to encourage all students to improve their vocabulary and spelling and to promote literacy skills in combination with the English K-6 Syllabus.

A showcase of author and illustrator videos filmed at several events, including the Sydney Writers’ Festival.

Literature and language arts
Year 5 to Year 12
Gain valuable insights by watching the finals of the NSW Premier's Debating Challenge.
More digital resources Back to the top

No items available for the selected filters. Please reset and try other options.
Back to the top